The RocNaNo Blog offers Wordless Wednesday writing prompts. This is my response to today’s challenge, based upon this photo: 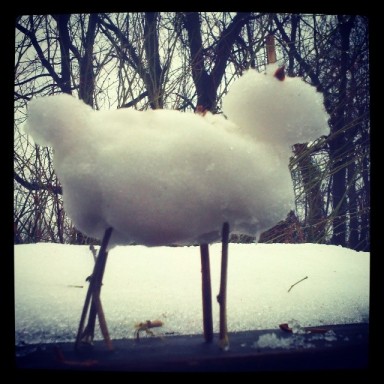 Clint pulled the shabby blanket tighter around himself. A great white expanse was laid out before him, from his feet to over his head. It wasn’t clear where ground ended and the sky began. He sighed, his breath momentarily blocking what little vision he had. A snowflake lit on his eyelashes, fluttering as he blinked. Clint swept it away, immediately regretting the movement as the blanket slipped off his shoulder again.

The wind rose and hummed through the bare trees. Clint shuddered while he snatched at the blanket. His fingers were numb from the cold, and felt blunt and distant. He couldn’t grip the frayed edge of the blanket. With a groan he twisted his body and slid back into the dark, damp hole that had been his shelter for the last several nights. He crawled as far as he could into the darkness, drawing his knees up to make a ball of himself.

Another day, he thought. Maybe two. He popped a nut into his mouth. There was almost nothing left of his food supply. “Maybe three, if the weather breaks.”

He tried to sleep, but rest evaded him. His body spasmed with shivering as he lay there, staring out at the white sky. He gave up and pulled himself back to the entrance of his hole. Davey would have loved this snow.

Clint picked up a clump of snow and considered it for a moment. He began to mold it. A smile crept across his face. He took some twigs and improvised some legs and stood the little snow animal on the rim of his shelter. “We’ll call him Shaun,” he giggled, sliding back down to the relative warmth at the back of the tiny cave. “Shaun the sheep.”