The RocNaNo group frequently posts random writing prompts. This one involves beer, so it caught my eye:

Random #WritingPrompt: A six-pack of beer, a surreal news story, and a famous quote. #amwriting

The familiar hiss and click of the cap coming off my bottle of beer set my mind at ease. I poured the contents of the bottle into my favorite tankard and settled into the comfy chair in front of the fireplace.

Everyone was away for the evening. I’d have a chance to finally enjoy a bottle of my new brew without interruption. If only more people understood the value of a good beer.

My eyes drifted to the sign that hung conspicuously over the mantel. 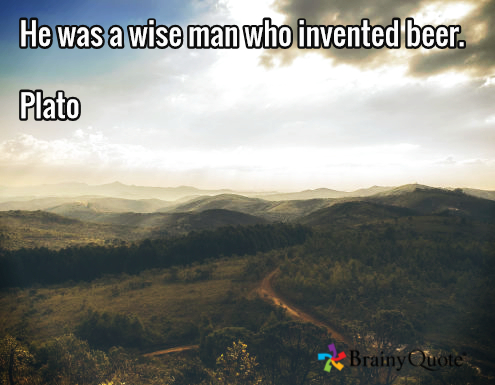 Yeah. If ancient philosophers got it, why didn’t my roommates?

I took a sip and savored the flavor as it washed down my throat. I had a whole six-pack of this new ale, brewed with ancient yeast recovered from fossil whale bones. For some reason, I had expected it to taste fishy, but I guess whales aren’t fish. Maybe they taste like chicken.

I must have sat for 20 minutes before the silence of the house finally got to me. I flipped on the TV, knowing full well nothing would be on. What was on was a news conference.

I changed the channel. The last thing I wanted was to hear about all the problems of the world. It was the same news conference, only a different camera’s perspective. The next channel, same thing. It wasn’t the president talking though. Just some guy in a T-shirt and a blazer. I shut off the TV.

“YouTube it is,” I muttered. I turned on my laptop and opened a browser.

“Did you see this?” and a link to a news story, “Wild Yeast Destroys Microbrewery, Escapes.”

I clicked the link and checked the calendar as the page was loading. No, it’s not even April.

“How does yeast destroy a lab?”

The photos in the news piece were startling. A building was crumbling under a froth of fermentation. Like that time I forgot to put the blow-off tube on my primary fermenter, brown bubbly slime was everywhere. The foamy mess extended from the building, enveloping a used car dealership next door.

I looked closer. Wait, that was the brewery that made the beer I was drinking. The fossil whale beer.

I looked in my mug. The beer still had a decent head on it, despite having sat in the tankard for more than half an hour. In fact, maybe it was thicker. And was it moving up the side of the cup?

I turned the TV back on. That guy. With the T-shirt and blazer. He was the master brewer. He was talking about how to kill yeast.

I looked back at my mug. A tendril of foam had reached the lip of the vessel.

A notification sounded on my laptop. My buddy wrote, “You didn’t open that beer did you?”

My eyes drifted back to the sign over the mantel. “Maybe Plato wasn’t so right,” I thought as I felt the cool touch of foam on my tankard-bearing hand. This was not good.