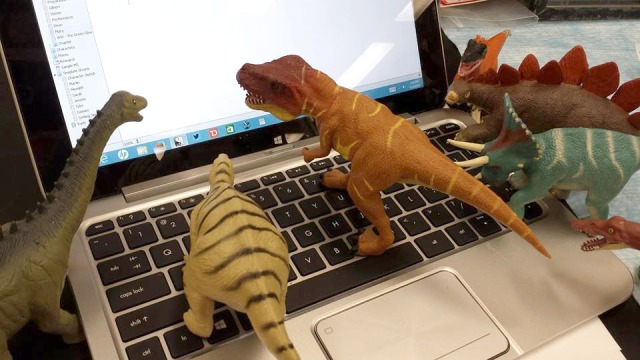 They gathered, squinting at the glowing wall in front of them.

A rumble began in Rex’s belly and grew louder. A deep growl escaped his mouth as he attempted to touch the whiteness before him. But his arms didn’t reach.

Rex stomped his foot impatiently. Something changed in the whiteness. A dark shape appeared. Rex stomped again. Another shape.

The others gathered around him, watching cautiously. Velox snapped at the forms on the glowing surface. He was especially attracted to the blinking one. He repeatedly checked the back side of the wall for whatever creature was causing this.

Rex turned and roared, “My words. Make my words.”

“You’re right,” said Patty. “The symbols there are the same as the ones under our feet. Look.” Patty pressed on the squares below her feet. The same symbol appeared in black on the glowing wall.

“Yes,” said Sarah calmly. “And if you use the correct symbols, you make words.”

Velox tittered and nipped at the side of the wall.

“Don’t eat it,” snapped Tracy. “You’re the reason we can’t have nice things.”

“My words. MY WORDS!” Rex was getting frustrated, reaching for the symbols appearing before him and failing because of his stubby arms.

“Is there fish there?” mumbled Barry. “I’m going to eat my fish.”

“You spell fish F-I-S-H,” said Sarah, pointing at the correct squares with her long neck.

Tracy stepped back, colliding with Barry who was chewing on his fish. “Oh, sorry,” Tracy muttered. “Frill in the way.”

“You always say,” mumbled Barry with a mouthful of fish. “Always the frill.”

The light disappeared. The wall was blank. And dark. Velox flipped his tail, eagerly waiting to the symbols to come back.

Rex slammed up against the wall. “Light. LIGHT. My words!”

Sarah tossed her head back. “Now you’ve done it. No words for you, Rex. No words.”

Rex stopped and turned slowly to her. “My words,” he snarled.

“And that’s why we can’t have nice things,” added Tracy.

“My words. Mine!” Rex snapped.

Rex leapt at Sarah only to be slapped down mid-leap by her flying tail.

Rex sat on the little squares with symbols while the others walked away. “My words,” he pouted.

Velox came and sat beside him, eagerly whipping his tail from side to side.

Rex sighed. “There Velox,” he muttered, stroking the feathers of Velox’s head. “There, there. Now they’re gone. Did you unplug it like I told you?”

“Go on then, Velox. Let’s restart this machine and get started. Now we can begin our conquest.”