The RocNaNo Blog offers Wordless Wednesday writing prompts. This is my response to this week’s challenge, based upon this photo: 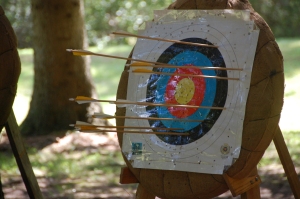 “What on Earth have I gotten myself into?” Muttered Hanna as she drew the bow.

“Come on. Keep it straight,” added Dasmer. “You’re all bent.”

Hanna held her breath and tried to aim.

“A little higher,” whispered Dean, who crouched behind her, sighting down the arrow.

Hanna loosed the arrow. It dropped quickly and skipped along the ground to tap the base of the target.

“Sure you can,” said Dean softly. “Just relax.”

The arrow flew, sailing past the target into the grass beyond.

“Yes. I know,” said Hanna. “But miracles I cannot perform.”

“Lord Dasmer! A word if you will!” Markus was observing at the back of the range. Hanna frowned. No doubt Markus was not pleased with her performance.

Dasmer grunted and strode off. “Yes my Lord. Of course.”

Markus smiled faintly. “Now you, Hanna. You carry on. Dean will help you.”

“Aye, Dasmer.” Hanna could hear Markus, though he was no longer speaking to her. “What think you is the matter here?” Hanna could not understand Dasmer’s reply.

“Breathe in. Breathe out,” said Dean. “Let us relax ourselves a bit.” Dean led Hanna through some breathing exercises for a minute. “Now, keep breathing. Nock an arrow.” Hanna complied. “Raise your bow and draw.” Hanna pulled the string and held her breath. “No. Breathe. Breathe, Hanna.”

Hanna’s breath left her mouth explosively. She tried to breathe normally. “I—.”

“Shhh. Just breathe. And aim.” Dean crouched behind Hanna again, observing her aim. “See, it’s going up and down with you. Work with it. Then loose your arrow when you’re ready.”

Hanna waited, watching the point of the arrow shift with her breath. She released the string.

“Hold, Hanna,” said Dean calmly. “Breathe. And do it again. Nock an arrow.”

Hanna drew and paused as before, then let the arrow fly.

Hanna aimed quickly and released the arrow. It missed wide.

“This is not the battlefield, Hanna. Nock your arrow.”

Hanna raised the bow and waited. When she released the arrow, she was rewarded with a satisfying thack!

Five more arrows Hanna let fly. Five more times came the satisfying sound of the target being pierced. Hanna reached for another arrow and was startled to find her quiver empty.

“I can’t believe I actually hit the target,” said Hanna.

“I’m not surprised,” said Markus, who had approached after she was done shooting. “I’d expect no less from you.”

“But no bullseyes. I got all around it,” said Hanna.

“Aye, but they’d be dead just the same.” Markus leaned close to Hanna. “Relaxation is the key. And don’t let others trouble you. You know what you need to do.” Markus straightened up. “Aye, his Majesty will be pleased. Perhaps you’ll join him on the hunt yet.”