Field work – what scientists do to study a certain phenomenon in its natural environment. For geology and paleontology, this means going out and crawling over the ground to find the necessary fossils or rocks.

One of the great mysteries of what I do as a paleontologist is the concept of field work. Last summer, I blogged about my field experiences as they were happening. I did this throughout last year’s 25-day field season. You can look at those posts here.

Now, I’d like to summarize ten days of field work I did in the High Arctic of Canada in 2012. What it’s like. What we’re trying to learn. This will be mostly through pictures.

Where do you work?

Why do you work there?

The original reason to go to Axel Heiberg (before I joined the project) was to study the Earth’s magnetic field.

The axis of the magnetic field and the ‘true’ North Pole (the rotational axis of the Earth) are offset somewhat.

Axel Heiberg Island is near where the magnetic North pole emerges from the Earth.

But even as long as 90 million years ago, Axel Heiberg was at high latitudes, as seen in this reconstruction of the continents.

So if we wanted to learn something about the magnetic field 90 million years ago (as it is preserved in rocks), Axel Heiberg is a good place to go for that too.

But the reason why I was there is this:

Where all those people are gathered is a fossil quarry, which has yielded all sorts of marine critters, including Champsosaurs, turtles (including a new species called Aurorachelys), and fish.

How do you live?

We have a little camp set up essentially in the middle of nowhere. It’s not too far from where the fossil locality is. 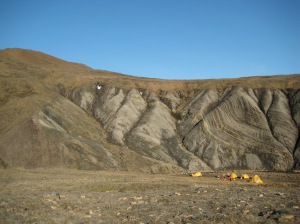 How do you get there?

It is a little remote in the High Arctic, so it takes a while to get to the camp site.

Then there’s the Twin Otter flight to the little ‘air strip.’

To call it an air strip is being generous. We only got the twin otter a little stuck.

The twin otter left us behind.

But then our next ride came.

It took several trips, with much of our gear hung in a net below the helicopter.

What do you see?

The best part of the whole trip was all the amazing things we got to see. 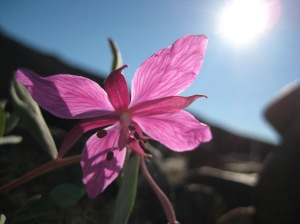 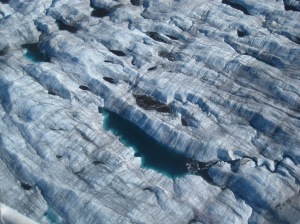 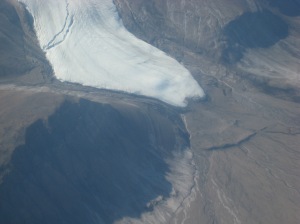 I got to see some geomorphic features I’ve only ever lectured about.

I wound up in some pretty amazing places, and see some things that few will ever see, courtesy of our helicopter pilot!

How do you know what age the rocks are?

We actually don’t exactly know the age, so that’s why we’re up there working.

How do you find fossils?

Sometimes you just fall over them. That’s how this locality was originally found.

Sometimes the fossils are just sitting there on a cliff face. Here’s a giant clam:

Some fossils aren’t body fossils. Here are some traces left by the burrowing of worms!

How do you collect rocks?

Collecting rocks isn’t necessarily pretty. Most of the time it requires a hammer.

When all is said and done, the rocks are loaded into crates and flown home. 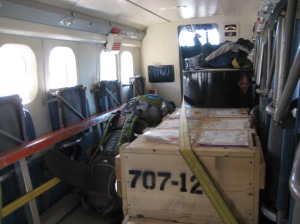 Do you have any fun?

Well, I was smiling during the trip…

And I was still smiling at the end of the trip, on the long flight home.

Scientist (Paleontology, Geochemistry, Geology); Writer (Speculative and Science Fiction, plus technical and non-technical Science); Mom to great boy on the Autism spectrum; possessor of too many hobbies. View all posts by paleololigo