“E” is for Exakta, by Ihagee

The Exacta cameras, and smaller Exa models, are single-lens reflex cameras made in Germany.

We have two Exaktas and an Exa in our collection.

The Exaktas came primarily with a viewfinder hood. You’d have to hold the camera at waist level and look down to aim and focus the camera. You were, however, looking directly through the lens. 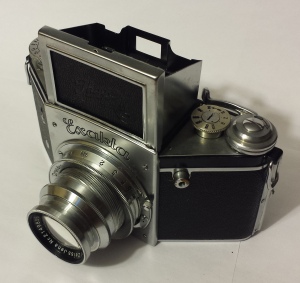 This was not a camera for 35mm film. Instead it took larger photos on 127 roll film. 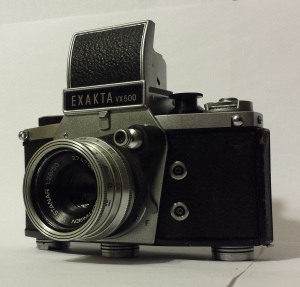 For fun, I’ll also include the Exa Type 1.2 that we have in our collection.  This little camera, made specifically for 35mm film, was only manufactured for a few months in early 1952.

The earlier Exa cameras were unique because the view finder could be swapped out for a pentaprism, allowing the photographer to hold the camera up to his or her eye for focusing and aiming.

I did once put a roll of film through the Exa. I ought to go find those photos…

The other cameras featured in this A to Z Challenge are linked on this page.

One thought on ““E” is for Exakta”